5 Monks on a Break 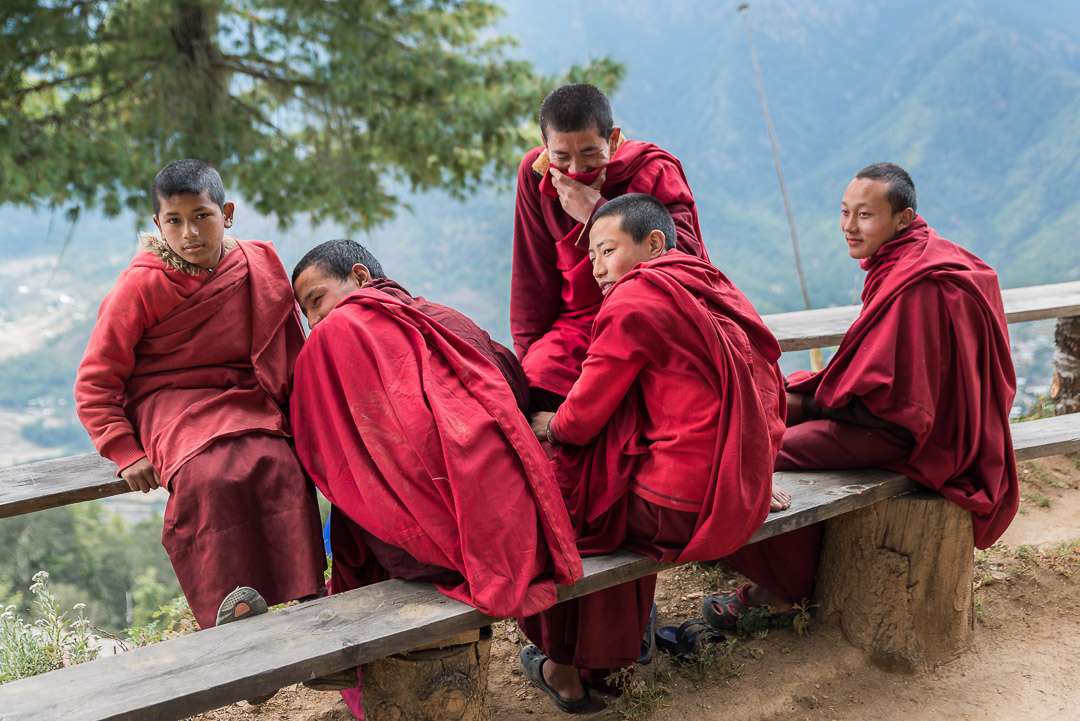 5 Monks on a Break

Bhutan is a special place. It’s really quite different than any other country I’ve visited in SE Asia. The mix of culture, it’s people, the geography and history – all add up into an incredible experience. I encourage all my readers to make the effort to visit this country at least once in their lifetime.

This photo of ‘5 monks on a break’ was shot on the last day of my most recent trip to Bhutan. Seeing monks in Bhutan isn’t unusual. In fact it’s quite common, since the country is quite religious. But despite their ubiquity, I was sometimes surprised where I would spot them. Though in hindsight, that was mostly because there were so many temples around the country, and a lot of the photography I was doing there involved temples.

Outside Paro, there is a small temple called the Tiger’s Nest. This is quite a famous temple, as it’s perched quite precariously on a side of a high mountain. It takes several hours to climb up to the temple, and it rises about 3000 metres above sea level. Luckily, climbers only need to climb about 900 metres, but it’s still a very slow and challenging hike.

Near the top of the mountain, where the temple is, there is a small vegetarian restaurant and rest stop for travellers that are venturing to the temple or beyond. The food is quite good, as it is in most places around the country. It’s especially good, if you like cabbage (long story, running joke).

When my group was heading to this small restaurant, we came across these 5 monks, quietly chatting and giggling among themselves. Initially, I walked past them, and wandered a bit further up the trail. But as I walked away, their laughing got louder. I looked around and saw that they all had their attention focused on one monk in the middle. With their heads down and giggling, I had to investigate. As I drew closer, it became clear that one of the monks had a mobile smart phone, and they were watching something on the phone. I could see the glow of the screen as it was shaded by the dark red robes.

I approached as close as you see in the photo, and the phone owner quickly hid the phone in the folds of his robe. They pretended nothing was going on, but clearly knew they had to hide the device from foreign eyes. I asked what they were watching on the phone, and they said ‘nothing’, in clear English. But I knew better. It seems that even at 3000 metres, near one of the holiest sights in Bhutan, kids will still want to use technology to entertain themselves, when no one is watching.

Everyone should hike up to the Tiger’s Nest, at least once in their lifetime. If you’re game, check out Private Photo Tours for some personalized photography experiences to Bhutan, and beyond.