A Close Shave in Hanoi 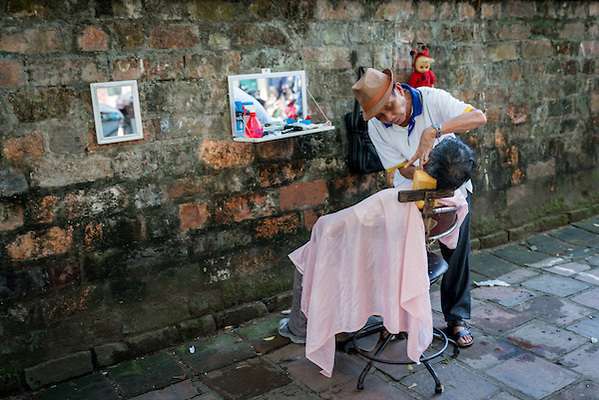 A Close Shave in Hanoi

When it comes to men’s grooming, I think Vietnam has got it figured out. Maybe all of Asia has.

The scene in the photograph you see above is quite common throughout the streets of Southeast Asia. In many small streets all over Vietnam, Cambodia, Myanmar, Thailand and even China, you’ll see enterprising men set up a portable barbershop. All they need is a mirror they can hang on a wall, some clippers and scissors and a spray bottle, and they’re set.

This is not to say there are no hair salons in the area – quite the opposite is true. Hair salons outnumber restaurants, I think. But for a gentleman looking for a close shave in Hanoi, what could be more convenient that stopping at a roadside barber when you’re out getting some milk at the corner store?

For all the local street barbers I’d see on my walks through the cities I visit, I never once saw a ‘waiting room’ for a lineup of waiting customers. I think this must be the case because there are so many of these barbers around, that when you need one at a moment’s notice, you can just pick from one of many around. No waiting for a close shave in Hanoi.

This particular street barber had his shop set up outside walls of the Temple of Literature in Hanoi. This is one of the oldest temples in this super old city in Northern Vietnam. I am sure he gets plenty of walk by traffic, as the temple is very popular to visit. But despite his (presumed) popularity, he was less than cooperative in being photographed. As I snapped away, he looked up and said something in Vietnamese. Based on his demeanour and the velocity of his speech, I took it to mean that he didn’t want to be photographed. (Perhaps another definition of a close shave in Hanoi?)

After voicing his displeasure at being photographed, he pointed to a sign out of view that indicated he charged money for being photographed. I guess it happens so often, that he wants to capitalize on it. I supposed that’s not a surprise, since he’s in a very touristy area.  So I gave him 20,000 dong. Everyone in Vietnam is a millionaire, since $45 USD is one million VND.

If you’re interested in getting your own close shave in Hanoi (or to photograph one), check out Private Photo Tours, for some personalized photography experiences in Vietnam and beyond.

← Prev: Vietnam's Traffic Troubles Next: The Falls at Klungkung, Bali →