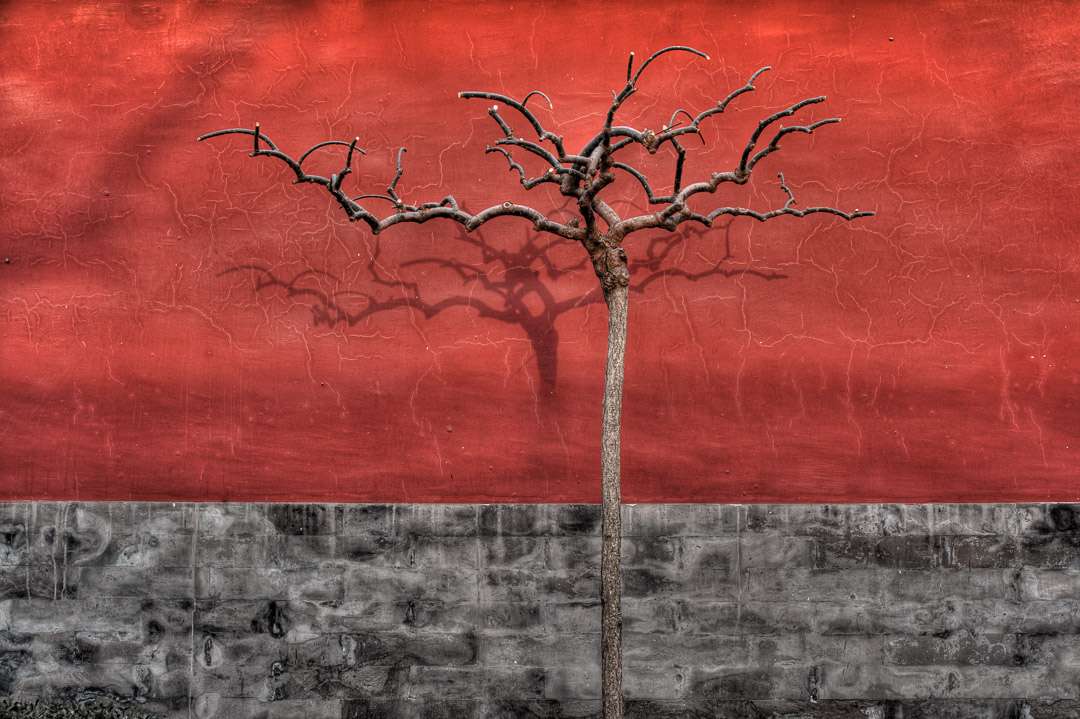 Photography is not just a fair-weathered pursuit. Very often, the best photos are made when the weather is less than ideal. And this photo of a barren tree in winter is a good example of that.

During the time that I was living in Beijing, I would visit the Forbidden City museum grounds pretty regularly. On most days during the warm months (um, maybe the hot months), the grounds were very crowded. But during the colder months, far fewer people would visit the museum, allowing for some much better photographs.

The whole of the museum grounds are surrounded by a high wall, along with sentry towers that harkened back to the days when it served as a royal palace. The walls are painted red from top to bottom, and are relatively maintained year round to keep up the appearance.

The wall that is shown in the photograph above is not actually part of the museum wall. It was the outer wall of a hutong that was directly across the street (and moat) from the Forbidden City. I think it was common for the neighbouring community to paint their homes in a similar style to the nearby old palace.

When I was wandering around the museum looking to photograph the towers and ice-covered moats, I came across this wall, and the few barren trees nearby. What stopped me at first were the trees, because they looked so thin, yet so strong. Not the typical barren tree in winter months. The shadows that they were throwing towards the background walls made them seem even stronger.

What I noticed about this particular tree, was that the shadow didn’t seem to be complete. I think the wall was not perfectly flat, and the sun was partially blocked by the nearby museum walls, providing only half a shadow. Being in front of this tree at this exact moment was something that I couldn’t repeat if I tried. To me, it sums up the cold harsh winters and soft light in Beijing. It’s amazing what you can find even in the coldest conditions.

If you are hoping to photograph your own version of a barren tree in winter in Beijing, (or anywhere, for that matter) check out Private Photo Tours for some personalized photography experiences in China and beyond.