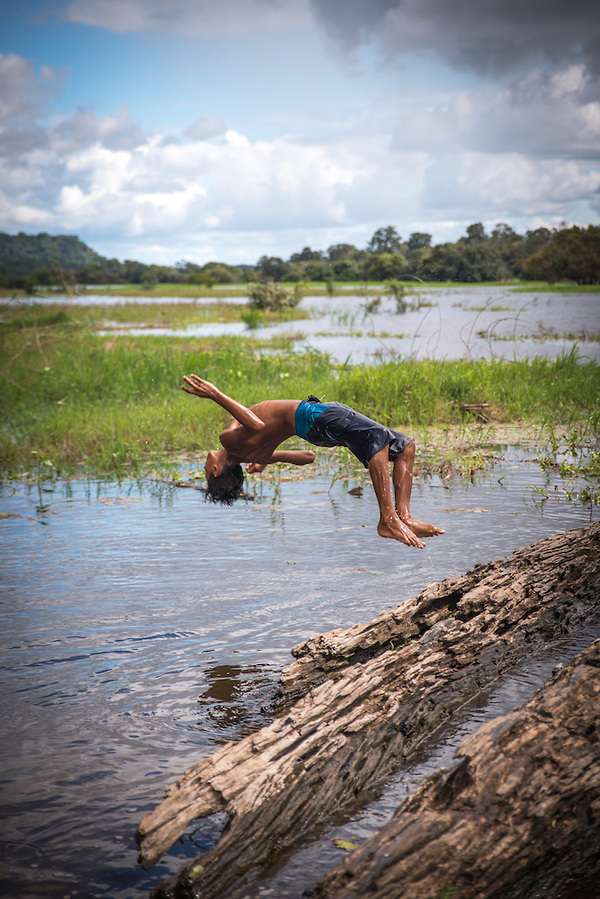 During my first visit to Brazil in 2013, I saw a great deal of the country, from the sprawling cities of Rio and Sao Paolo, to the small river communities like Boca de Valeria. As much as I like large cities, it was the smaller towns and villages in Brazil that held my attention more. Boca de Valeria was one of those villages.

This small village is situated along the banks of the Valeria River where it meets the Amazon River. It’s not very big, with a population of just over 100 local Indians living there. The village has been around for thousands of years, and is slowly adapting to modern technologies. I saw TV antennas and many of the villages had cell phones. But for all the new modern conveniences, they seemed to live a simple life, thriving on tourism for the most part.

While I was in the village, I wandered along the riverbank for a kilometre or two, and would come across small houses built up on stilts. There were not a lot of people around, but once in a while I would meet one of the locals and take their photograph. Most of them allowed me to do so quite willingly. At one of the houses I visited, I noticed a backflipping boy using logs to backflip into the river.

I watched the backflipping boy for a few minutes and took some photographs from a distance. He saw me, and motioned to come closer. I walked under his house and stood at waters edge. He waved me out further, and though I was reluctant at first, I started to walk out on the logs as well. I think I was about 4 meters out from the river bank on a bouncy log. All I could think about was how long it would take to dry out my camera if I fell in.

When he climbed out of the water and back on to the log, and made all the other logs bob up and down, I made the quick decision to get back to land. But not before I snapped this last photo of the backflipping boy.

If you’re interested in exploring Brazil to look for your own backflipping boy, or other countries in South America, check out Private Photo Tours for personalized photography experiences.

The page you requested could not be found. Try refining your search, or use the navigation above to locate the post.