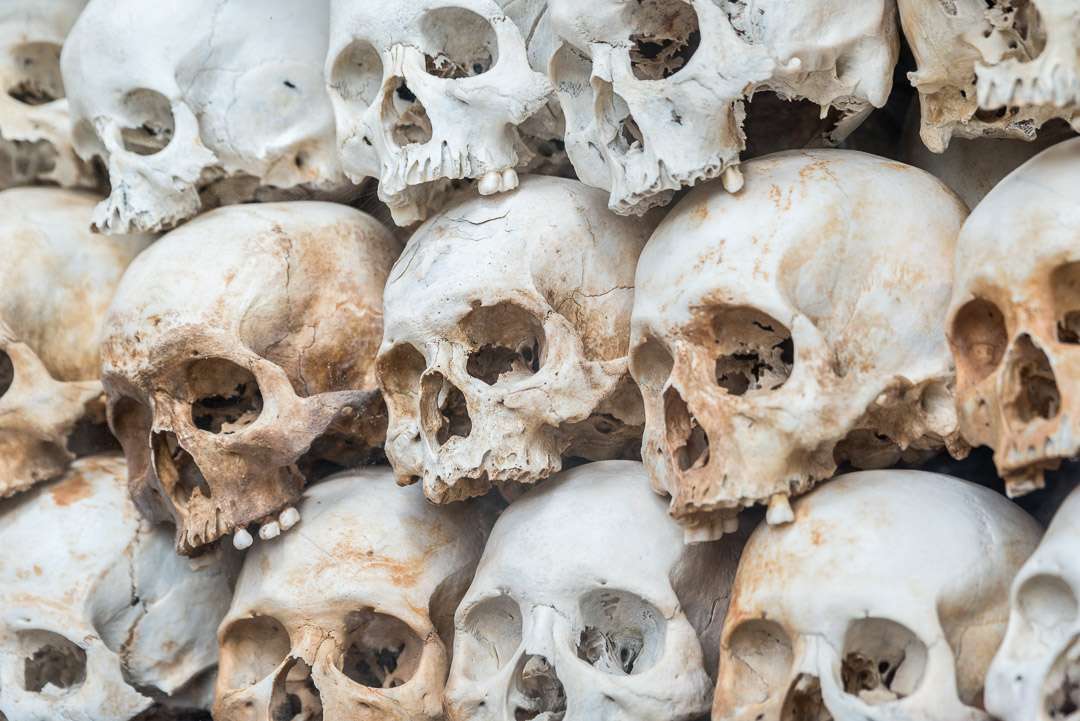 There are many periods in history when mankind has had to deal with horrific situations enacted by evil men with a strong grip on power. Southeast Asia has had their share of shameful and traumatic periods, and the atrocities committed by Cambodia’s Khmer Rouge lead that list. Everyone should learn this Cambodian history lesson.

As this is a photography blog, I am not going to get into the whys and hows of all the horrible incidences that occurred during the Khmer Rouge’s reign of terror. But I do encourage you to read up on this Cambodian history lesson. It’s tragic and shocking, and well worth everyone’s time to understand just what went on.

However, as a photographer visiting Cambodia, it’s pretty difficult to avoid seeing it. As disturbing as it may seem, Cambodia has opened the doors on history by creating monuments and museums to this dark period of their existence. Their goal is to ensure that everyone sees what happened, and that it won’t happen again. The graphic displays in the museums are frank and honest, without being sensationalized. It’s sad to bear witness to the displays, and read the history written on the signs. But it helps to understand.

The photo included here is from The Killing Fields exhibit and monument, located just outside Phnom Penh, in a community called Choeung Ek. It’s officially known as the Choeung Ek Genocidal Centre. This location is one of hundreds scattered throughout the country, where 1.7 million Cambodians were killed. The football field-sized museum grounds attract thousands of tourists every day, most of whom come away with a sadness that’s hard to describe. The grounds contain dozens of mass graves that appear sunken into the ground, some of which have been excavated, and some are still intact.

There is a buddhist stupa in the center of this museum, which people can enter. It has plexiglass interior walls, and about 5000 human skulls and bones are piled up inside. Many of the skulls are separated by sex and methods of execution. It’s both disturbing and fascinating to see. I’ve been to this exhibit several times, and each time I notice that people just stare silently at the display, slowly taking it all in. Some people can’t stay inside the stupa for too long, as the emotions can be overwhelming.

For me, I have mixed emotions about the exhibits. While I am saddened by the genocide perpetrated by the Khmer Rouge, I also feel grateful to be able to witness the museum, and to deepen my knowledge of this Cambodian history lesson. I am grateful because I live in a time and place where this is unlikely to happen again. I am grateful to contribute, in a small way, to Cambodia’s emergence from a horrible period in their history, by providing much needed tourism dollars to this great nation. And I encourage all of my readers to do the same.

This photo was one of several dozen I’ve shot of the monument. They are all disturbing and powerful images. I understand that photographs of skulls can make many people uncomfortable, but it’s done with reverence and humility. I don’t intend to shock people by including the image in my galleries, but rather to pay some respect to the memories of the innocent victims by making sure more people become aware of their plight through my images and words.

If you’re interested in visiting the Killing Fields, and want to learn more about this Cambodian history lesson, check out Private Photo Tours, for some personalized photography experiences in SE Asia and beyond.