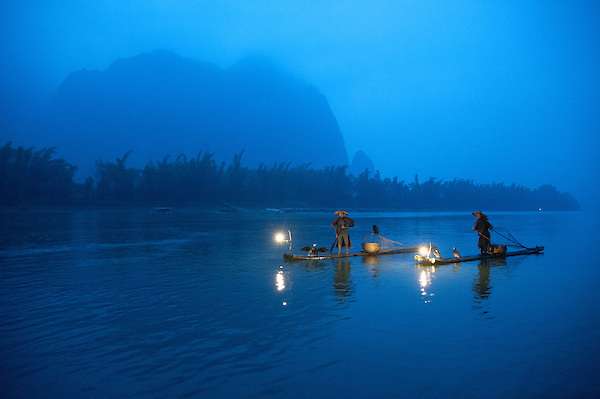 China has so many amazing places for photography, that it’s really impossible to visit them all in a short time. Even if you were to just visit the UNESCO heritage sites, it would still take months. But you really should find time to visit Guangxi Province, if only to see the cormorant fishermen.

Guangxi is an autonomous province located in the southeast portion of China, sharing borders with Vietnam to the south and Guangdong province to the east. In my estimation, Guangxi province contains some of the most spectacular scenery in all of China. The region is most famous for it’s limestone karst mountains, the Li River and countless terraced rice fields. I expect that if you were to buy a calendar of images from China, it would most certainly include a photo from this region.

One of the more iconic scenes from Guangxi, and one that generates a lot of tourist dollars, are the cormorant fishermen that ply the Li River near Xingping and Yangshuo. These fishermen traditionally used cormorant birds to help them fish. They would tie a string around the bird’s neck, tight enough to hold on to it, but not harm it. The birds would dive into the water to catch a fish in their beak, but because the string was tied around it’s neck, they would not be able to swallow the fish.

Upon returning to the boat, the cormorant fishermen would remove the fish from the mouth of the bird and toss it in the basket. The bird would be able to swallow smaller fish, and would be fed after the job is finished for the day. This practice of fishing is no longer used commercially, and is mostly performed for tourists today.

When I was in Guangxi in 2011, I visited Guilin (the former capital), Yangshuo and Xingping. But certainly the highlight was spending time along the Li River. The cormorant fishing was visible a few times during my stay there. But in this particular image, I made a special trip early in the morning, hoping to catch a sunrise when the fishermen were performing. Unfortunately, I was greeted with a rainy morning when I got up at 4 am to catch my boat ride. But, I made the best of it. Regardless of the weather, it was still worth the trip.

The challenge with shooting this photo, was that it was raining through most of the shoot. I was holding an umbrella about the camera and tripod, and continuously wiping my lens clean from mist. Although you can’t tell by looking at the photo, there were about 30 other photographers standing beside and behind me. All of us were cursing the rain, but happily trying to get some good images out of it. The fishermen were good sports, but the birds didn’t seem to be too energetic.

This image was one of about 200 photos I shot of this specific scene. The day started out very black, as there was no visible moon or stars out. It would eventually go from black to blue and then to grey. The best images were taken when the light was bluest. I think the fishermen knew well enough to stand pretty still, and they weren’t really fishing. They were modelling. Despite the disappointing weather, I am still happy with the results. But I am going to return and catch that sunrise some day.

If you’d like to get up before dawn to photograph cormorant fishermen, then check out Private Photo Tours, for some personalized photography experiences in China, and beyond.