Looking Back at the Forbidden City 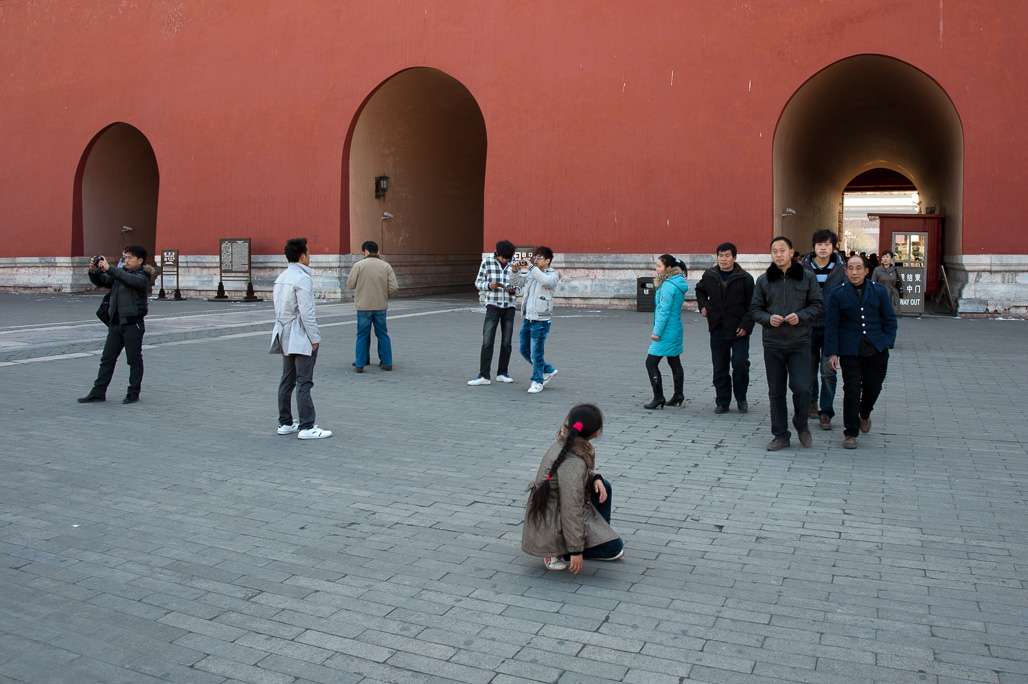 Looking Back at the Forbidden City

One thing I’ve learned over the years as a photographer, is that your best shots are not always in front of you. Sometimes, if you take the time to look around, you’re walking away from a spectacular view. For this reason, I make the effort to look behind me every once in awhile, if only to appreciate things from a new viewpoint.

Take this photo as an example. I shot this photo moments after walking through that wall you see. I turned around at that spot, and saw this scene unfold in front of me. The large red wall is part of the formidable entrance to The Palace Museum in Beijing (aka The Forbidden City). It was built as a fortress, a palace, and a sanctuary for the line of emperors in China‘s dynasties. It’s very thick, and very tall, and I assume it was built that way to withstand foreign armies from breaking through. To me, it also makes a wonderful background for a photograph.

When visitors walk through the massive walls and enter the large open space on the inside, they are greeted with one of the most impressive scenes they will encounter in Beijing. The Forbidden City is an incredible site, with centuries of history on display that you can walk through and touch. It’s common for visitors to stop for a moment once they enter, and stare in awe of what is before them. In this very place, about a century ago, the last Chinese Emperor lived with his thousands of servants.

What makes this image work?

Let me tell you what I like about this image. There are many things that jump out at me. First off, I like the red colour. Red figures prominently in Chinese culture, of course. But it’s also a strong colour visually. Studies have shown that the colour red is one of the most attractive colours for us, and we are immediately drawn to it. Photos that contain red just look more interesting to the viewer.

I like the composition of the image too. It’s not exactly the classic ‘rule of thirds’ that many people prefer. The main elements seem to cut the image in half – which is usually the wrong thing to do. But in this case, almost everyone’s head is at the same height in the photo, and that makes the composition more interesting.

But what I like most about this image is how many different ‘stories’ there are in it. I count 5 different scenes in the photo, with 5 individuals or groups of people playing their part. Even though they are in close proximity to each other, they are very separate as well. Each individual or group pays no attention to the others around them. Yet, our eyes jump from one group to another, imagining what is going on, five different times. And why is that girl crouched down in front? All the time I’ve looked at this photo over the years, I’ve never been able to come up with a logical reason for her pose.

So try to remember to look around you when you’re visiting a place you’ve never been before. You don’t always walk back in the same direction you came from, so if you don’t see it then, you may never see it. Make a point of turning around when you can, and see what you just left behind. You may be pleasantly surprised – the photos behind you may just be better than the ones you’re looking for in front of you. Looking back at the Forbidden City did that for me.

If you’d like to visit Beijing, and this amazing Forbidden City, have a look at Private Photo Tours, for some wonderful personalized photography experiences in China and beyond.