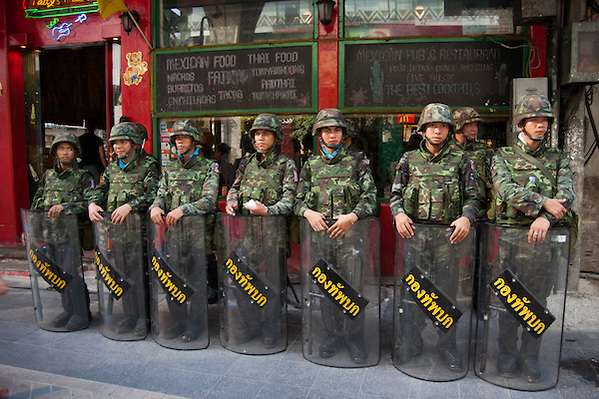 Anyone that has been to Thailand in the past decade or so is likely aware of the country’s troubled political situation. It’s not stable, to say the least. The current Prime Minister as of this writing, is Yingluck Shinawatra. She is the younger sister of ousted PM, Thaksin Shinawatra. The older brother lives in exile while his sister runs the country. Though many believe Thaksin still pulls the strings from abroad.

When Thaksin was abroad in 2006, the military staged a bloodless coup, and after a series of turnovers,  Abhisit Vejjajiva was installed as Prime Minister in 2008 (though he was not elected democratically). “Red Shirt” protestors took to the streets in March and April of 2010. They demanded that the government be dissolved and new elections called. The protests escalated to the point where whole districts were blockaded, hundreds were killed from both sides, and troops were deployed throughout my neighbourhood. Every day, I would hear the sounds of rifles, small grenades, and many sirens.

The area of Thailand where I was living was called Silom, and was the Central Business District, or part of it. Silom was close to one of the major demonstration sites in Lumpini Park. Tens of thousands of protesters would camp out there for weeks or months. The Red Shirt protestors also set fire to the largest shopping mall in Thailand, causing many millions of dollars worth of damage. Barbed wired was rolled out all over the streets, often blocking streets completely. When I felt safe enough to venture out on to the streets of Silom, I would come across many scenes like this, with soldiers standing at the ready.

If you are Thai, and depending on your political bent, you may or may not welcome the soldiers in your neighbourhood. But in many cases, I would see local residents bringing food and water out to the soldiers. Overall they did seem pretty welcome. In this scene, 7 soldiers are standing guard outside a Mexican restaurant called ‘Patty’s Fiesta’. The wording on their shields simply states “Royal Thai Army”. They were quite used to being photographed, to the point that I had to ask them to not make faces, and just look soldierly. Photojournalists that were covering these demonstrations wore battle gear like bulletproof vests and helmets. One photographer I saw had the words “No smiling” written on the front of his helmet, to ensure the protestors and soldiers didn’t look happy when he photographed them.

Train Travel in Sri Lanka is a great experience when you visit the island. Read about the photo taken by Ian while on a train in Sri Lanka.