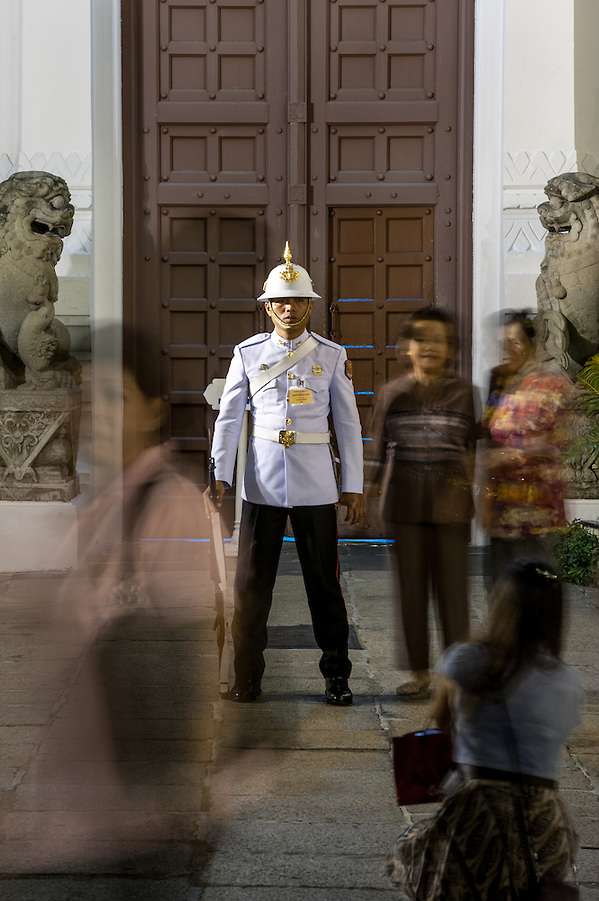 Thailand will always be one of my favourite places in the world. It’s a favourite from both a cultural and a photographic viewpoint. Perhaps the reason is because I am a westerner, and Thailand still seems very exotic to me. And these palace guards are a great example of that.

Modern Thailand is full of contrasts. Those with a knowledge of Thai history will see examples of old Thailand blended in nicely with a new Thailand that is the envy of its neighbours.

One of the many contrasts that are evident is how the centuries-old monarchy of Thailand still maintains its historical traditions. This is amidst the modern world thats moved on so much faster.

The previous monarch, King Bhumibol Adulyadej, ruled for 70 years, which was the longest reigning monarch in the world. King Rama IX, as he was known historically, was highly revered. A drive down any street in Thailand or a visit to any store or home will show you how this was true. Images of the King and Queen are posted throughout the country, and his reign was all most Thais have ever known.

One of the most popular places for tourists to visit when they are in Bangkok is the Grand Palace (where these palace guards hang out). Although the royal family doesn’t live on the grounds any more, this is the historical and official home for the Monarchy. Each of the Palace buildings are impressive in their own way, with many of them covered in gold tiles and guarded by mythical Thai creatures. The photo that accompanies this post shows an actual non-mythical (human) palace guard that stands as sentry outside the throne hall building, known as Phra Thinang Chakri Maha Prasat.

The photo was taken during one of the more popular times to visit the palace grounds in early December. The King’s birthday was on December 5, and on the days surrounding his birthday many events take place in and around the Grand Palace. Because it’s a popular time to visit, the Palace is naturally overcrowded with thousands of people.

When I was looking for ways to photograph the palace guards, it was very challenging to find times that were not filled with people. But as I’ve learned when visiting popular tourist areas, if the site is full of people, then the people are the photograph. So taking this philosophy into account, I found ways to show the people that were everywhere while at the same time not show them.

The Palace Guard stood motionless for as long as I was able to watch him. Countless tourists would wander up close, stand beside him and be photographed with him. I watched this process take place over and over, hoping to get a minute of solitude without other people in the photograph. That would never happen, so I decided to make some photos with the crowds passing in front of the palace guard. I shot a series of photos over the span of 10 minutes, using a tripod.

At first, people would see me standing behind my tripod, and apologize for getting in my way. I found it was simpler to turn my back and look away when my ‘subjects’ wandered in front of my camera. I didn’t need to look through my viewfinder to see if it was framed properly. After several shots using this method, and without the tourists knowing what I was doing, I got the shot I wanted.

If you’d like to explore Thailand, or any other country in SE Asia, check out Private Photo Tours, for personalize photography experiences.