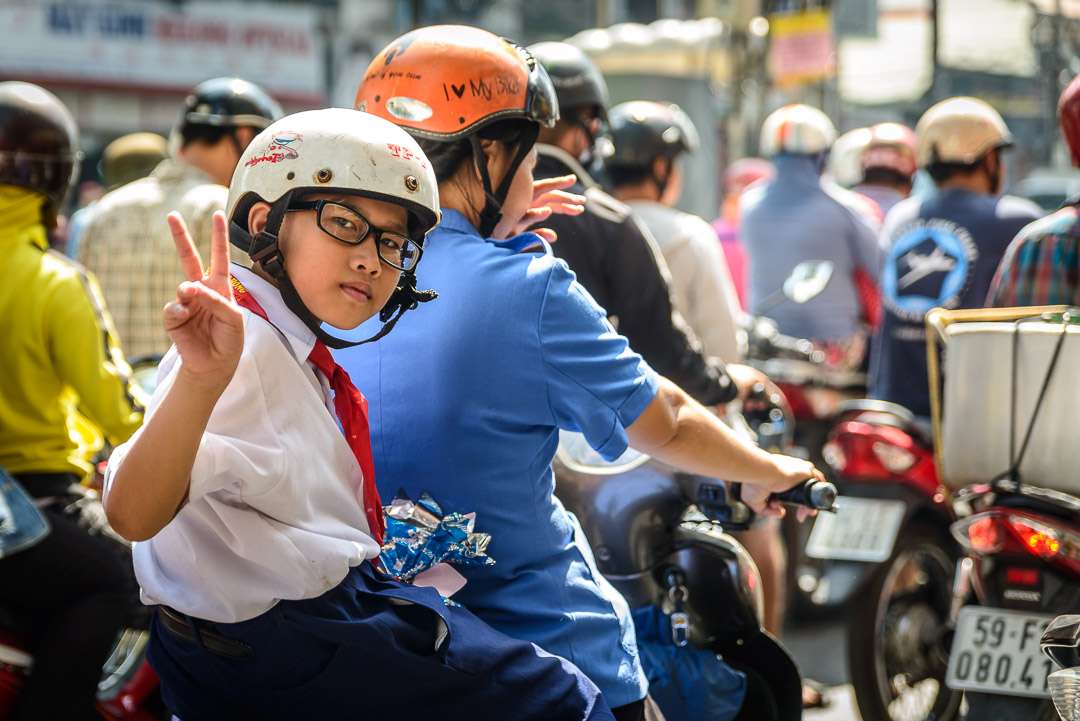 The major cities of Hanoi and Ho Chi Minh City are a great place to witness Vietnam’s traffic troubles. If you’ve ever been to these cities, you’ll know what I mean. I don’t want to suggest that it’s worse in Vietnam than it is in other SE Asian countries. But the problem does seem to be getting bigger, faster.

Getting around HCMC – or Saigon as some people continue to call it – is an exercise in patience. That’s because you really can’t get anywhere fast, if you’re in a vehicle. Or on a vehicle. The city streets are so clogged with vehicles, that everything moves quite slowly. According to reports from the Vietnam National Traffic Safety Committee, there are now more than 39 million motorbikes registered in the country, and about 2.1 million private cars. However, the current ratio of 20:1 of bikes to cars is quickly changing. As Vietnam moves into a middle-income economy, the private car is seen as a status symbol.

Owning a car allows the driver to commute in relative comfort. The benefits are obvious to everyone – a car allows you to stay cool in the soaring heat, dry from the monsoons, and dust-free. But the car also contributes to the traffic and pollution problems that plague the major cities. The NTSC predicts that there will be 3.5 million cars by 2020, but there are already 3 million more motorbikes on the roads today than they expected to be. So the number of cars will likely increase and add to Vietnam’s traffic troubles. And where will they all fit?

When you visit these cities, it’s really impossible to avoid Vietnam’s traffic troubles. Getting around on foot can be risky, if not uncomfortable. If you need to cross a road, you have to wade slowly but confidently into the thick traffic. Walking slowly, while looking into the oncoming traffic, will ensure that you make it across the road safely. If you try to run across the road, you will most certainly get hit. If you walk slowly, you will be seen and the motorbikes will simply move around you. It sounds scary, but it actually works. It’s really a thing of beauty, like a ballet.

Very often, I will sit on the back of a motorbike, simply because it’s the most abundant form of transportation, and it’s really the fastest way to get around. It’s not always comfortable, but it works. Traveling by taxi may be more comfortable, but it will most certainly take longer. I don’t know what the solution is for Vietnam’s looming traffic problems, but I don’t think replacing motorbikes with more cars will help at all.

Anyway, enough about governance. This is a photography blog. Let me discuss the photo now. I shot this photo while riding on the front of a ‘cyclo’ – which is like a rickshaw with the passenger sitting in front and the driver cycling from behind. It provides a great way of seeing the city in relative comfort. The girl in the photo was sitting on a scooter behind her mom, presumably on her way to school, as it was early in the morning.

The traffic was stopped at an intersection and the young girl in the photo turned around and saw me in the cyclo. She stared at me for a few moments, and then gave me her peace sign. It was serendipitous that she was there at that intersection at that moment. I grabbed a few quick shots, and then the traffic started moving again, and her mom zoomed up ahead and was lost in the thousands of other motorbikes.

It’s moments like these, where it’s really handy to have a camera in your hand. The moments are fleeting, and you only get one chance to shoot these photos. The best images shot on the streets of these huge cities are often the ones you don’t expect to get, or can’t anticipate. I saw literally thousands of people on motorbikes when I was being pushed along the streets in HCMC, but only this girl gave me any notice.

This photograph was shot with a wide-standard zoom lens, at the deep end of the zoom, at 70mm. Since it was shot ‘wide open’ at f2.8, the depth of field is shallow, and the crowd behind the subject is out of focus, but you can still see what it is. The image is cropped a little from the original, to provide a more pleasing composition, and the contrast is boosted a little.

The lesson here is to always be ready to shoot that image that wanders into your viewfinder. Sometimes the images you like the most are the ones you least expect to get.

← Prev: Cool and Dry in Cambodia Next: A Close Shave in Hanoi →