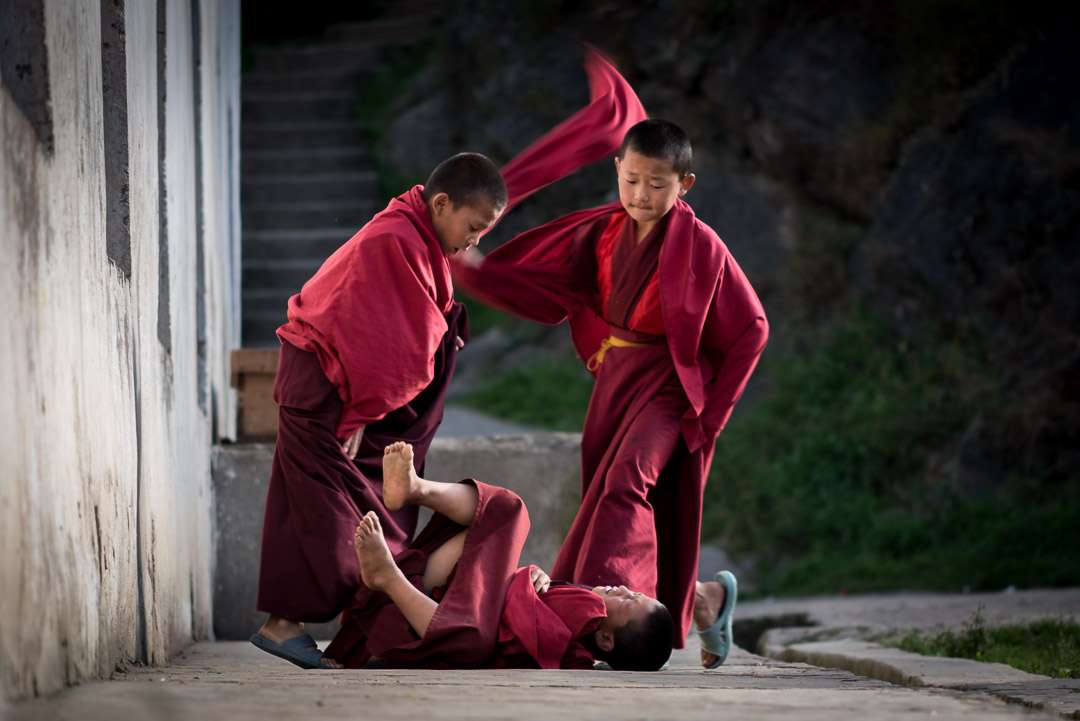 During my recent trip to Bhutan, I spent several days in the capital city of Thimphu. Although it’s the capital, it still has that small town feel to it. It’s population hovers around 100k people, and I wouldn’t be surprised if everyone knows everyone else. And everyone knows a young monk. It just feels that way.

Bhutan is rooted in traditions. Although western influences are slowly creeping into society, most people maintain the traditional ways of doing things. Men still wear the centuries-old Gho, which is a knee-length robe that resembles a kimono. It’s tied around the waist with a wide belt known as a Kera. I don’t think I can resist buying one on one of my future trips. It just seems so comfy.

And Monks. So many monks – lots of old monks, and lots of young monks. Buddhism is strong in Bhutan. It permeates the culture, it’s people, and it’s government. Because of that, there are Monasteries and Dzongs everywhere. And it seemed all of them presented new and different photographic opportunities.

I visited a rather large Monastery on a hillside on the outskirts of the city, and it seemed to be a teaching Monastery, as there were a lot of young monks around. As they were young, they still had that playfulness in them. I saw several monks chasing others, and throwing things. Not what you’d think of as monk-like behaviours. But it helped me understand that these Monks were still just kids. They hadn’t quite shaken all of their adolescence out of them on their way to full Monkdom (I am making these words up as I go along).

At the back of one of the large buildings, there was an outdoor latrine and showers, where the young monks would visit regularly. Most often, they would come out in Monk Packs, of 3 or 4 at a time. As I was watching this small group from a distance, it was clear that there was one Monk that ranked a bit lower in seniority, and was being chased around by the others. Much how when dogs lay prostrate when they play, the younger monk would submit to the thrashings, playfully. No one was getting hurt here. It was all in good fun. Just young monks letting off some Monk Steam.

If you’re interested in encountering your own collection of young monks to photograph, check out Private Photo Tours for some personalized photography experiences in Bhutan, and beyond.

← Prev: 5 Monks on a Break Next: Happy Children, Bigger Smiles →